Making Your Presence in the World! 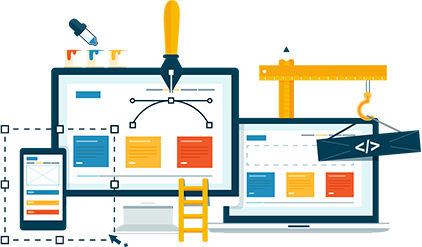 Responsive website design is a move aimed toward the technique of designing web sites to offer the most advantageous screening experience. This results in effortless reading and navigation with the least resizing, panning, and scrolling spread from angle to angle of a broad range of devices ranging from mobile phones to desktop PCs.

Responsive web design (RWD) term is associated to the concept of developing a website design in a manner that helps the lay out to change according to the user’s computer screen resolution. The concept allows for an advanced 4 column layout 1292 pixels wide, on a 1025 pixel width screen, that auto-simplifies into two columns. Also, it duly fixes on the Smartphone and computer tablet screen. Such a designing system is called “responsive website design”. Responsive web designing is a wholly different designing version than traditional web designing cannot accomplish. A site designed with RWD adapts the layout to the viewing environment by using fluid, proportion-based grids, flexible images, etc.

Responsive websites shorten internet marketing and SEO. Instead of developing and managing content for numerous websites, businesses with responsive sites can take an amalgamated approach to content management because they have only the one responsive site to manage. This in turn will allow you to integrate many of the back-end services, such as Facebook, Twitter, etc., and then present the integrated data back out the front-end layer on a responsive design so the application looks great on all devices without needing custom-coding for each and every device or screen size.

Images in responsive web designs are called context-aware. This exacting procedure serves the purpose of RWD as the images serve at different resolutions, ranging from bigger to smaller screens. The scaled images emerge in such a manner so as to change fluidly with the help of updated developer tools and coding languages, allowing designs to look sharp in each and every context.